This is Part 3 of a series of reflections on my time at The Nerdrum School, in Norway, August to September 2017. For information on Odd Nerdrum visit: www.nerdrummuseum.com

One of the highlights of my stay at Memorosa, Odd Nerdrum’s Norwegian estate, was witnessing the beginnings of “The Opening of the Prisons”, a monumental 30sqm composition, which Nerdrum has been dreaming of for decades. The “Prisons” is set up in a purpose-built studio affectionately called “Paris”. To help out in Paris is, for a student, a special treat, as the studio houses not only the “Prisons” but many masterpieces, some tantalizingly rolled, revealing just a glimpse of their curled up worlds.

I was fortunate on my very first day to help shift a dozen paintings from Paris to a truck bound for a show in Denmark. Some of these pieces I had seen in a show in Barcelona, and it was a little surreal to be handling them. At that stage the “Prisons” canvas was untouched. Work on this piece did not start until the end of August when a returning student, Bruno Passos arrived. Bruno, the lucky devil, was tasked with sketching and blocking in the composition, based on the master drawing. This was no small task: dozens of figures and 30sqm! Bruno, an excellent painter in his own right, brought Odd’s composition into the initial phase of its life.

As Bruno refined or corrected sections of the underpainting Odd began sessions with a male model for one of the figures. Although it is still in its early days the blocked in composition is enough to mesmerize. Its lineage also reveals itself quite clearly: it has the scale and poise of Raphael’s The School of Athens, and the drama of Rembrandt’s The Night Watch. It feels, in many ways, like Nerdum’s definitive answer to the titans of the Baroque and the Renaissance.

Whilst the “Prisons” lies at the apex of Nerdrum’s ambition as an epic composer, his modest portrait studies – often of his students – lie at the doorway of his heart as a painter. “In the beginning and the end there is only the face,” were Odd’s words at the end of a conversation one night. I was deeply moved by that utterance; by the words themselves and the way he spoke them, with deep and genuine feeling. That one line summed up his entire life’s vocation: to encounter and witness the mystery of the Other.

Before my first week was up I was called upon to sit for one of these portraits. I was to be Odd’s ‘Christ’ (apparently I fit the bill). Nerdrum developed this portrait over the next two months in 8 or 9 sittings. A lesser painter would have been thrilled with the results after two or three sessions (or even after the first), but Odd really showed us how to push further, how to strive for a quality of expression and vibration that he had not yet encountered; how to dance with the appearance and disappearance of a shoulder line; how to add something more and how to pare back, to simplify. 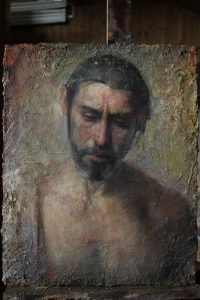 What is exemplary in Odd Nerdrum’s life as a painter, and what has impressed me most, is his work ethic. He is working for ten hours a day, on five or six separate projects. Even on a Friday night when we would gather by the fire for a film Odd would be working away at a sketch book. One day towards the end of September he had a terrible ear ache and felt quite unwell. I suggested he should take a day off – “Nooo! I cannot take a day off!” He is quite simply a painter-holic, and the thought of not working does not occur to him.

Those two months at Memorosa were so rich and one can never capture the entirety of the experience in words. It was very moving to be painted by such a master. After the last three or four sessions we began comparing the portrait to works by ElGreco and Rembrandt, both of whom Nerdrum reveres. It was fascinating to look at the differences in temperament and feeling. Odd’s work would sit beautifully besides ElGreco’s Saints Peter and Paul.

There is, of course, a social side to life with the Nerdrum family at Roedvik Gaard (Memorosa). I will not forget Bruno’s special desert (made with quite a lot of fake nutella), nor Giacomo’s tiramisu; dinners, films, games of soccer, ocean dips and a lot of rock-hopping along the shoreline; the evening bell signalling the Nerdrum family to dinner, reminding me of a monastery, a monastery for painters in black smocks, emulating the masters of the Western figurative tradition. 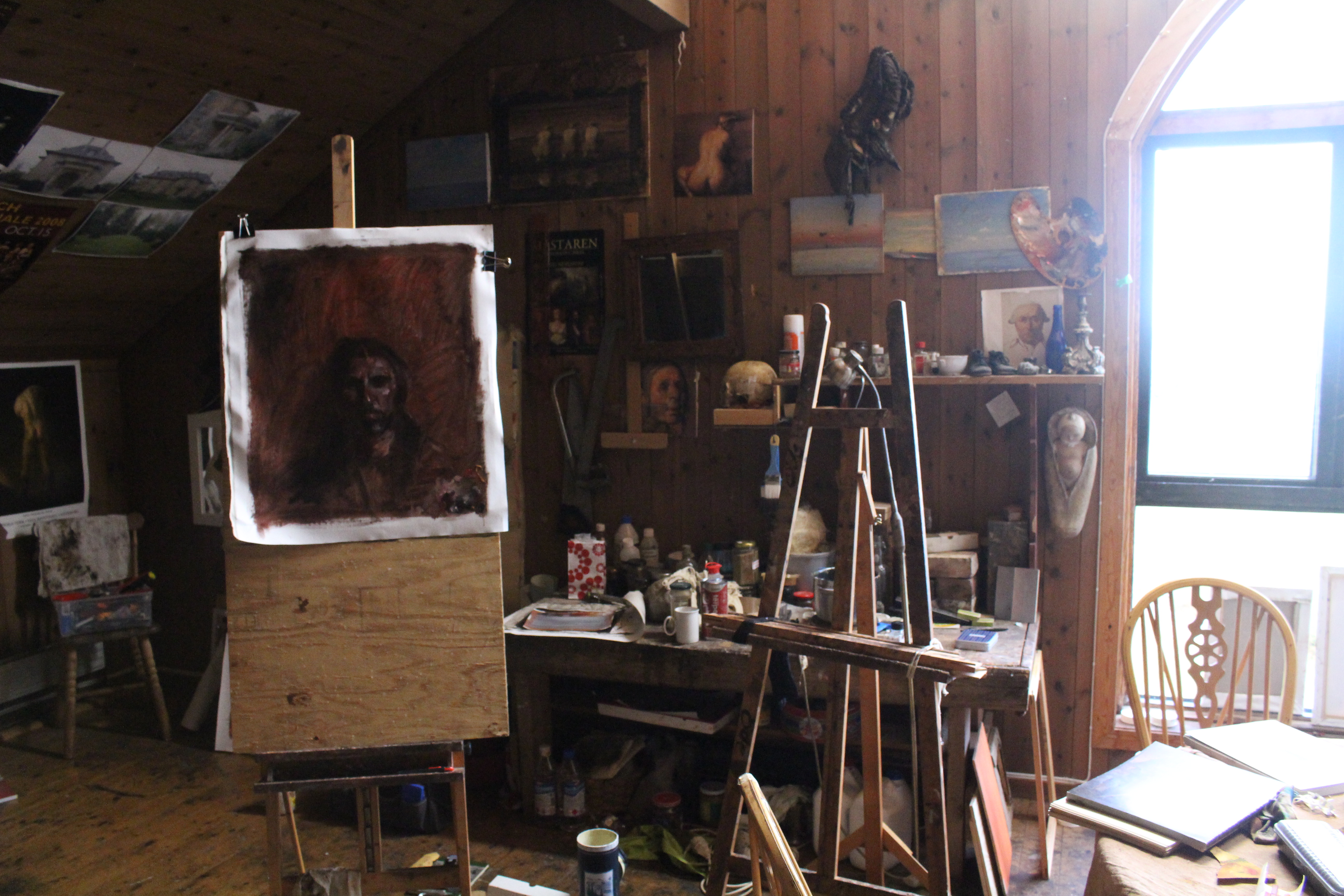 “‘Tis a cold and stormy night by the north sea. I can feel the walls shaking in the wind. Masterpieces lurk in the darkness below, oblivious to the storm. How quickly they have become objects to navigate on the way to elsewhere.”

“The morning after the storm the skies are washed clear as a white milky blue. The grasses are heavy with the remnants of frost and the rocks sit like seals which have basked in the sun, the moon, the waves and the ice for millennia. Roedvik Gaard is the name of this place, fingers of stone trailing into the sea, knuckles of sandstone and marble littering the shore. And further back a tower, tucked into the trees. There a dreamer wanders, from canvas to canvas, from shadow to shadow, from light to light.”

It is one of life’s ironies that the truly remarkable can become almost ordinary with familiarity. Waking up in the ‘tower’ room (a very beautiful loft above the studios) I would step down to the studio, navigating my way past masterpieces on my way to the bathroom. This familiarity would subsequently be countered by sudden waves of “oh my God, that is incredible”, followed by lots of close study. As a student of the Nerdrum School one is truly fortunate to be surrounded by Odd’s work, both finished and unfinished pieces, both large canvases and oil sketches for now-famous paintings. Odd allows and encourages complete access to his work, and most importantly to himself as he works.

During my first weeks at Roedvik Gaard (or Memorosa) painting would continue in the student studio into the early hours, with Jeremy, Renus and Natalia willing the dream to continue until they dropped. The morning would be a slow awakening, a flask of coffee and an icy jug of water for Odd’s studio the first order of business. For myself this was often preceded by a long walk along the rocks by the sea. August was pristine: clear skies, mid 20s punctuated by occasional storms. Bliss!

From between 10 and 11 the studio work would begin. For us students this consisted mainly of portrait and still life studies, as all work needed to be done from life. With Odd’s arrival there would often be time for discussion in his studio, in view of several large works in progress that Odd was wrestling with. These discussions were very illuminating and I recall being surprised at how many of the ‘moderns’ Odd reveres, an apparent contradiction with his very anti-modernist stance. From my diary on the 17th of August:

“Surprisingly Odd seems to be as much inspired by Carriere and Munch as by anything Baroque. He knows the ‘moderns’ very well and likes quite a few of them, including Klimt and Schiele. But Chagall he really dislikes.”

This should not be so surprising, however, as in his work it is always the vibration of life that Odd is reaching for. One of his favourite exhortations is “shoot in the middle!”, and this exactly what he admires in (early) Munch, Carriere, and the others, that they found and formed deep and clear feeling through powerful composition. But, for Odd, the link to perceptual reality needs to be strongly intact. Chagall’s departures from the real are too much for him.

I have consolidated my own thinking on ‘vibration’ and perceptual expression in the following formulation:

The source of all power is composition/ The spirit of all expression is vibration/ The dream of all reality is illusion.

Illusion alone begets a narrative; it is seductive but weak. Drawn with a strong vibration it becomes compelling, but poorly composed, remains lost. Powerfully composed and with strong vibration the illusion, and thus the narrative, is amplified into eternal and subconscious spaces.

Odd’s emphasis on the vibration of things (not in those words) was brought home to me through feedback he gave me on my painting ‘Crow Light’. “In many ways”, he said, “the bird is the best part of the picture.” In painting the crow I allowed it to be almost in several half scrubbed out positions at once, creating a strong sense of movement. I spent days and weeks on the human figure and probably a single hour on that crow. 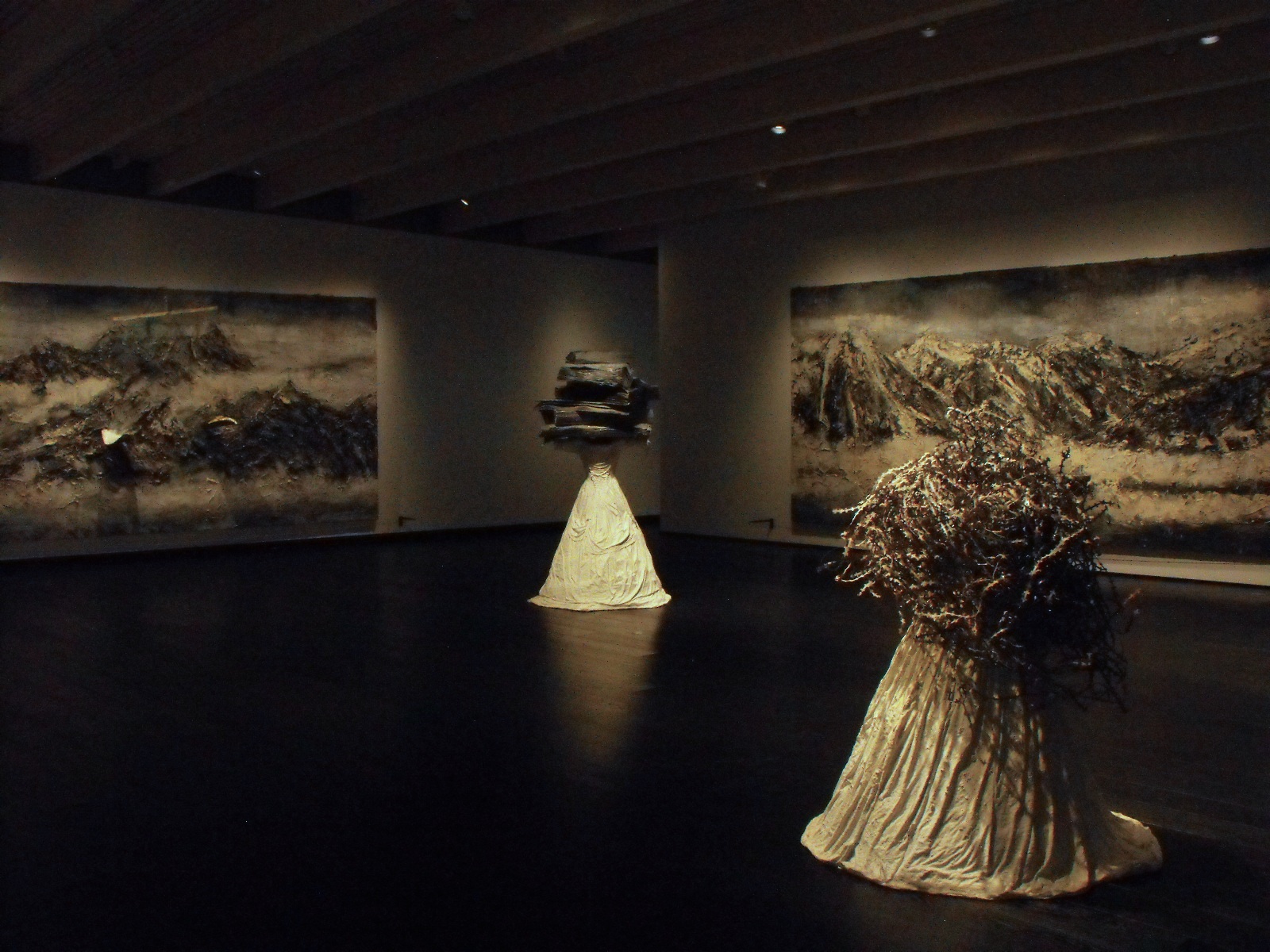 In late 2016 I traveled to Finland for a major Anselm Kiefer exhibition. The most dazzling piece for me was “Essence Ekistance”, a monumental painting, even by Kiefer’s standards, evoking the Alps of Central Europe, and taking up three walls of a gallery room.

Encrudded, cracked and stained, trowled and sledged; the sheer physicality of the paint belies the miracle of cold light and atmosphere that it evokes. To transform such thick layers of oil into something luminous is a masterful feat; it draws us in as we encounter mysterious forms, symbols and objects of lead, protruding from the canvases.

Kiefer collapses myths (“Noah” scrawled across the top left of the left panel) with modern history (a lead submarine protruding from the left panel) and alchemical symbols. His subject is no less than all of human history subject to continual state of decay and corrosion… 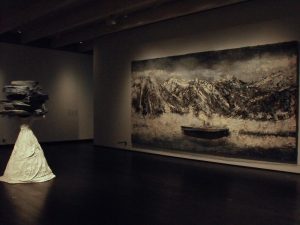 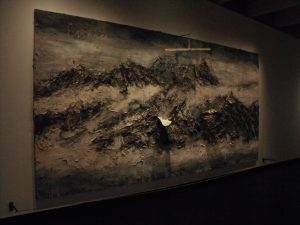 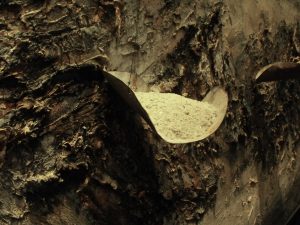 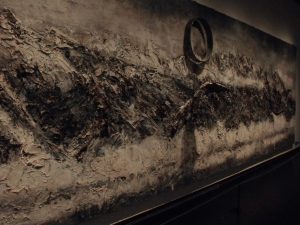